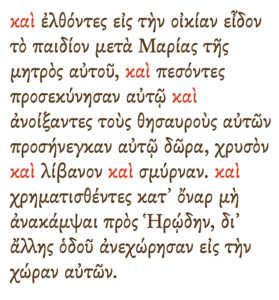 Earlier today, Eric Rasmusen posted the following comment in the Punctuation in Ancient Greek Texts discussion. While his comment is related to that topic, it raises a question more specific to the usage of καί, and I would like to invite other comments more particular to the use of that conjunction than to punctuation.

Here’s what Eric had to say:

I don’t know Greek. I have a question about Biblical Greek, which often strikes me as ugly in literal translation. I was just reading Colossians in English and wondered whether most of the “and”‘s in it ought to be translated by periods. In other words: is the Greek word kai actually mean NEW SENTENCE?

3:14 And above all these things put on charity, which is the bond of perfectness.

3:15 And let the peace of God rule in your hearts, to the which also ye are called in one body; and be ye thankful.

And here’s my response, to which you can feel free to add:

I agree that overly literal translations sound “ugly.” That’s because they try to make English sound like Greek, and that’s just not normal English usage!

As to the meaning of καί…

No. Καί is not equivalent to a verbal punctuation mark. It can be used in all of the ways that the English word “and” can be in English, plus a few others. I’ll stick to ways that have a parallel in English to make the discussion below easy to follow.

Usage of καί to link words

Καί can be used to link two or more simple words in a list:

gold and frankincense and myrrh (Matthew 2:11)

Καί can be used to link two or more phrases:

The land of Zebulun and the land of Naphtali (Matthew 4:15)

Καί can be used to link entire clauses:

Usage of “and” in English differs from the usage of καί in Greek.

In English we often omit “and” when it would sound repetitive. For example, in the first example above (Matthew 2:11), a more natural English translation would be “gold, frankincense, and myrrh” rather than “gold and frankincense and myrrh.” In a list of three or more items, we tend to use “and” only between the last two in Engli sh. In ancient Greek texts, however, it is quite common to find καί between each set of items in the list. While including “and” in all of these places in the English translation would sound “ugly” as you put it, including και´in Greek sounds quite normal.

Because Ancient Greek had a much more developed system of grammatical endings (for verbs, nouns, pronouns, adjectives, etc.), it was possible to write sentences that were considerably longer than what would be understandable in English. Often the parts of such long sentences were held together by conjunctions like καί. There were, of course, many other such conjunctions, but καί was among the most common. Overly literal translations attempt to make English work like Greek and include all of those conjunctions rather than breaking the long sentences down into the smaller units that English usage requires. This results both in “ugly” sounding sentences and a significant loss of comprehensibility.

For more on punctuation in Ancient Greek, see these posts: